Posted at 11:03h in Blog by Sherry Poore

First Settlers in Clinton County
As far as can be ascertained through the dim mist that surrounds, its early period, Clinton county’s first permanent white settler was Thomas Stockton, Sr., after whom Stocktons valley took its name. Only the barest details concerning this sturdy old pioneer can be ascertained. A Virginian,he probably came to this state through the Cumberland Gap, over the route that Kentucky pioneers made famous. We are told by tradition that he came into the wilderness of early Clinton county around 1791 or 1792.
Another traditionary account states that he first settled in or near the Caney Cap, near the late Killis Huddleston farm, where he threw up a crude log hut. According to this account, water was obtained from a Spring which was some distance away. One day while going after water, Mrs. Stockton was confronted by a large black bear, which she frightened away by flapping her apron at it. A further detail in this traditionary account is that the trees in this neighborhood were too large and thick for easy clearing, so Stockton and his family moved to what is now known as Duvall valley. At the extreme lower end of the valley, he built a log house near a spring some distance west of Spring creek. At that time Clinton county was a virgin wilderness. As far as can be determined, settlers had not yet penetrated into the adjoining county of Cumberland; only a very few had ventured into Wayne County.
The location of this first permanent settlement in Clinton county can be definitely established by the record of survey made of it. On August 25, 1798 Stockton was granted a certificate of settlement to 200 acres of land by the Commissioners for Settlement South of Green River, which located his grant on Spring creek, calling for a line “to Whitney’s Fork of Spring creek, thence down the creek.”Whitney’s Fork was an early name for the present Koger creek, which means that Stockton’s grant lay above and below the juncture of that stream with Spring creek. Most of his grant lay on the west side of the creek, with a small portion jutting across it, along the north bank of Koger creek. His certificate of settlement states that his “improvement” was on the northeast side of the claim. This suggests that he cleared ground and built a log cabin on the west side of the creek, possibly just a little south of the present Beech Bottom road. His tract included the present site of the Irwin Consolidated School. Stockton made an official entry on this land on October 20, 1799, and it was surveyed on November 6 that year by William Wood.
According to the United States Census of 1790, enumerating the heads of families of 1782 to 1785, Thomas Stockton, Sr. was living in Albenarle county, Virginia, with five children. We do not know the name of his first wife; his second wife was Mary Golden, whom he married October 28, 1775 in.Virginia. She died February 13, 1809 after coming to this county.
The traditionary date of Stockton’s settlement in Clinton couhty was given in a letter from Mrs S. A. Davidson, Chanute, Tennessee, to the author.
Whitney’s Fork was so named after Samuel Whitney, who had a grant in 1798 on the east side of Spring creek, adjoining Stockton’s tract. However, there is no evidence that he was ever an actual settler of the county. By 1799 his 200 acre tract was owned by James Wood. 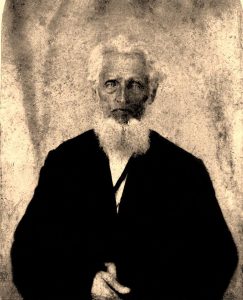